I thought I'd go a bit behind-the-scenes here and show the next huge project I'm working on. Basically, it's going to be a guide (like my earlier Mole and Survivor guides) for challenges on a wide range of shows in a single file, but this time before I get too far into it I'd like to get some feedback about the planned format. (Please note, the below image contains spoilers for the current Dutch season of The Mole, though features no actual results. Click to zoom in.) 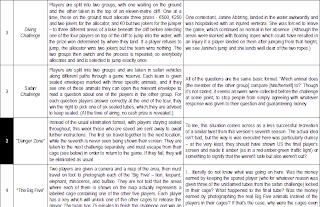 Basically, there's four columns - episode and challenge title like on the first version of the Survivor guide, followed by the challenge rules and a separate column for commentary. I'm going to try and find something unique to say about every challenge I add to avoid having too much empty space, whether that be odd facts about the challenge, an analysis of why it worked (or failed), or something else entirely. Twists that don't come about as the result of a challenge - for example a new non-elimination penalty on The Amazing Race, as opposed to the "win or lose, you both go to Tribal Council" twist on Survivor - are marked with black episode columns. Since not every challenge has a known official title, and some shows I'm planning to include are in foreign languages, I've had to compromise - italics for translated titles, quotation marks for unofficial titles. Thoughts?
Posted by David at 9:19 PM