THE MOLE (US, Australia): Bangkok Hilton

Up until now I've tended to bitching about exactly why challenges didn't work, and how to make them better. This week, I thought I'd take two different variations of the same basic challenge (which is not actually CALLED Bangkok Hilton in either instance, but which seems like it should be given the challenge involves using hotel rooms as makeshift prison cells) and comparing them.
Both of these challenges involve each player being locked in a separate hotel room (with no idea where in the hotel the others are), and having to use an assortment of clues to escape and reunite. However, the clues in one room are usually only helpful for a player in another room, and phone communication is the key to success. And while some of the clues themselves are identical (as these two were both adapted at the same time from a challenge seen in the Belgian version), that's about where the similarity ends. And, yes, this is the sort of instance where explaining the challenge is going to require me to use contestant names. So...

(Please never let me do that again unless I ever get bored enough to discuss Pirate Master, in which case merely discussing it would be a spoiler to all but the sixteen people who watched it.)

We'll start with the lesser of the two versions, from the United States.This version of the challenge was structured very similarly to the original Belgian version, with three remaining players (Jim, Kathryn, and Steven) and an almost identical clue layout. They had ninety minutes to escape, and would win $75,000 (out of a maximum $1,000,000) if they succeeded. Ignoring all of the unnecessary decoy clues, the simplest solution is as follows: Kathryn's exercise bike powers a light in Jim's pitchblack room, which Jim must use to find the graffiti "Juan Guerrero" written on the wall. Kathryn can then look out her window to see a van with a date on it and use it as the code to escape her room. She must collect a package for Guerrero from the lobby and open it to find a small box. Opening it with the key from her room will release the key for Steven's room. Using his room number as the combination for a briefcase, containing the sheet music for Mary Had A Little Lamb hidden inside a newspaper. They must then slide it under Jim's door and have him play it on his xylophone to escape.

There are quite a few major problems with this design. For starters, Kathryn is doing pretty much all the work, Steven's only role is opening his briefcase to find the sheet music, and Jim only has marginally more to do. For a challenge like this to work effectively, true teamwork is required. Here, all we have is Kathryn's teamwork. Secondly, success in the challenge seems to hinge almost entirely on whether Jim can not only read sheet music well enough to play the song, but (as he pointed out) also find the right keys on the xylophone. If he can't do that, then the team is pretty much screwed right from the start, even if they can sort everything else out quickly. Finally, a significant amount of the challenge takes place not in their rooms but in the remainder of the hotel.

On the other hand, the Australian version basically takes the format and reinvents it. Part of that may have been necessary sole because of having been used with four plyers left (Brooke, Hal, Mal, and Michael) instead of three, but the solution itself is a lot more even: Michael's exercise bike powers a tiny LED diode in Hal's pitch-black room, which must be used to read a note next to it. The clue "VCR" is an indication for Mal to play the movie in his - Psycho. Brooke must then turn her shower on and wait for the glass door to fog up, revealing the combination for her safe, which contains a key and "The Birds". Michael must find the combination for his own safe hidden in a copy of The Birds of Australia, which itself is hidden in a pile of books in the room. The clue inside the safe is "Rear Window", directing Mal to look out his to see 1800-ROPE on a van parked outside. The number opens his safe, but Rope directs Hal to a piece of paper attached to the rope on his blinds, with his safe combination. Inside are the keys to his own room and Brooke's, while Brooke's key opens Mal's room and Mal's key opens Michael. If the team escaped within an hour, they would win $10,000 (out of a maximum $250,000).

See? Such an improvement. All four players are stuck in their rooms until the very end of the challenge, everybody's doing a roughly equal amount of the work in solving the puzzle, and the clues are tied together through the theme of Alfred Hitchcock movies (in addition, every room in the hotel had a plaque naming it after one of his works, with the players in the rooms named after clues). The challenge itself already was a good one -- obviously, otherwise it would never have been copied -- but this really is a prime example of analysing a challenge and fixing it to perfection. Seriously, the only bad thing I can say about the challenge is that it didn't take up more of the episode -- and the other two challenges in the episode were very good, too. In fact, it's so good I'm going to do this... 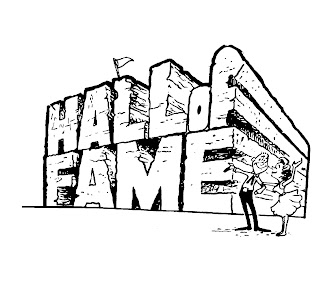